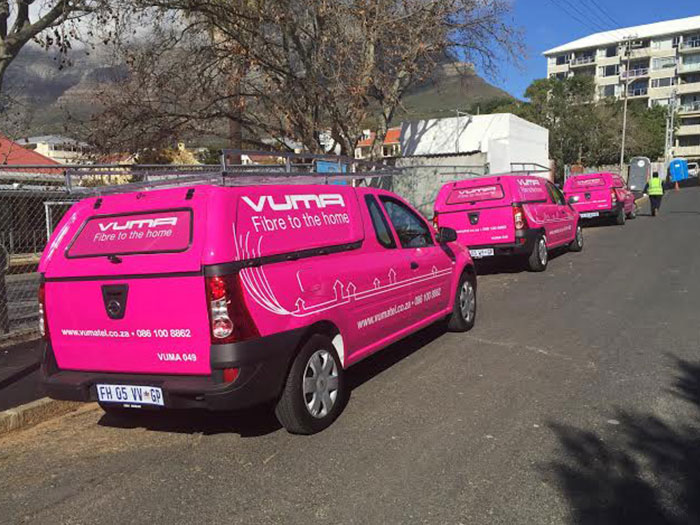 With its ubiquitous pink vans driving around middle-class suburbs, Vumatel is a distinctive brand in the two cities where it operates, Johannesburg and Cape Town.

But CEO Niel Schoeman did not go to a fancy design studio to create its corporate identity when he cofounded it with Johan Pretorius just short of two years ago. They sketched it out “over whiskies” one night, plumping for the extreme pink since “that space on the colour wheel was unoccupied by other brands”.

The name comes from “vuma”, which in Zulu has meanings ranging from “be willing” to “thrive”, and from “woema”, Afrikaans for “speed” and “get up and go”.

So far Schoeman is happy with what the fledgling company has achieved. “In a short time we have become a recognisable brand and have been rated the best fixed-line broadband provider,” he says.

There were already hints that Schoeman, 45, would become a bold entrepreneur during his student days at the University of Stellenbosch, when he invested his study loan and opened a tuck shop in his residence. “I got other people to work in the tuck shop, starting to leverage the skills of others in my ventures.”

At that stage the young man had ambitions no loftier than his comrades: to get a good job in a big company.

His degree in industrial engineering would stand him in good stead, and he secured his first job at Spearhead Logistics in Cape Town. His experience in SAP and Oracle took Schoeman to London and later the world, where he worked as a technical consultant for the UN, large banks, and drinks firms.

In 2003, he and a colleague, Ian Wyrley-Birch, launched The Birchman Group in the UK to manage large technical projects for clients. The company expanded across Europe and to Dubai and South America.

“I met an English rose and, with my first daughter on the way, decided I would like her to grow up in SA,” he says. “We sold off some of the consultancies to listed companies and management teams.”

But some of The Birchman Group remains under Schoeman’s leadership.

In 2007 he and his family moved to George, Western Cape, where his parents had retired.

“I played golf for six months,” he says. But his restless mind spotted opportunities in the city to help small companies and business ventures. “I need to be busy,” he says.

Fibre optics was becoming a reality in SA at the time, with Dark Fibre Africa (DFA) deploying the local network.

“Birchman managed and built the fibre-optic network in SA and we later sold this programme management office to DFA.”

He and Pretorius launched Conduct Telecoms to provide fibre to businesses. “We built networks connecting businesses in large precincts such as Sandton. We owned the infrastructure, but it was made available to internet service providers who service banks and other big businesses,” Schoeman says.

This company was sold to DFA in 2014 as Schoeman and his business partners — Pretorius and Richard Came, formerly of Dimension Data — realised Telkom was not going to be rolling out fibre to homes in SA.

This was a good opportunity for small companies to get involved and challenge the incumbent, he says.

Telkom has since started ramping up its fibre-to-the-home offering as other fibre companies jumped on the bandwagon spurred by the demand for high-speed internet.

“With more and more fibre being deployed, SA has leapt up the competitive index, and the cost of bandwidth keeps dropping,” Schoeman says.

With 95% of SA’s internet provided via copper lines, there is continuing pressure to reduce copper prices, he says.

Vumatel’s first foray into fibre to the home was in the Johannesburg suburb of Parkhurst. Since then it has been extended to 25 suburbs across the city.

“Trenching is easier for maintenance and provides space for expansion.”

Fibre will lay the foundation for a smart city, Schoeman says, where everything from traffic lights to CCTV networks is connected. “We will finish in Johannesburg in a year’s time and by February we will hopefully have 100,000 homes connected,” he adds.

Although Vumatel plans to spend R3bn over the next two years — raised through Investec, Standard Bank, and Vantage Capital — he sleeps well at night, Schoeman says. “I have confidence in the future of fibre. The model works; the infrastructure is in the ground.”

The company is also providing free uncapped internet of 1Gbps to schools. “Connectivity is essential for education,” he says.

It is no accident that the Vumatel employees who come to consult with residents are vibey and enthusiastic.

“We like to employ younger people — the average age is 26-27,” Schoeman says.

They are highly motivated because “they have a sense of a higher purpose — everyone understands that connecting SA is important.

“They feel rewarded when they see the customer’s delight.

“Vumatel is growing fast, providing great opportunities for employees to learn and progress.”

“It is crucial to create jobs for our youth,” Schoeman says.

Staff retention is based on trust, he adds.

“For instance, we offer our contractors favourable payment terms, so they have cash flow to run their own small companies.”

A big challenge for Vumatel now is to cope with rapid growth.

“With success comes scale and we are competing with big companies, but we don’t want to lose our young, agile culture.”

While he looks to overseas models for experience and inspiration, Schoeman, who lives in Stellenbosch and commutes to Johannesburg weekly, says he has no plans to relocate.

“Overseas there are bigger players and less open space for entrepreneurs. SA offers great opportunities for entrepreneurs and it is wonderful to see the impact one’s operations can have here,” he adds.